as told by his son Suheil Madanat during his funeral December 21, 2014

An infant child finds himself alone in the place and is drawn to a red and shining object. He crawls closer and jumps into it; screams of pain ensue. The neighbor runs in, sees a child burning on hot coals, and carries him far away. With the poor health care in 1929 and the absence of any form of treatment, the child Odeh spent the years of his childhood and youth agonizing from the various infections of his hand and anguish in the town of Ader, east of Karak. However, he loved knowledge, and studied with passion in the city of Karak, and showed  intense intelligence; he was at the top of his class despite his poverty and the fact that he had to constantly move between the houses of relatives. One of the dignitaries in the town felt that his education was useless because of his disabled hand, and told his father, "Your son is retarded and his education is a waste, take him out of school so he can help you in your work." And so it happened, with the young powerless man, with his innocent and agonizing heart, thrown in the midst of the harsh waves of life. Behind the waves of life, however, an amazing Person was looking at the heart, not the hand. And planning. They sent him to work with a local itinerant merchant, and the young man Odeh had no way of knowing that this acquaintance would change his life forever. He was influenced by the integrity of the merchant, Yaqoub Jawabra (Abu Orjwan), and asked him about the secret to his life, so the merchant told him about a Savior who changes lives: Jesus. On that day, the 19th June 1949, Odeh Madanat was born again, and an overwhelming joy captured his heart throughput his whole life in a stormy love story with his Savior. They sent him to a seminary for the Alliance Christian missionaries in Beirut.  After three years he graduated with high honors despite having never completed secondary school. He was sent by Mr. Ward to pastor the Alliance church in east Jerusalem.

After a year his friends in the ministry introduced him to a young women named Maha Oweis, whom he met in Beirut. But why would she marry a disabled man without any money? She saw in him a pure love for the Lord, and she found in partnering with him the Lord’s calling for her to serve the Lord. She accepted in a decision of the mind rather than the heart, and the Lord was exalted and magnified in their house and in their ministry over half century in which she was the perfect help, supporter and true lover. In the beginning of their marriage their prayer was that the Lord give them children only if they will be for the Lord, and the Lord answered their prayer in all their children and grandchildren, and in a spiritual descendants whose number the Lord alone knows.

Most of the many comments that poured in yesterday from those who loved Odeh came from around the world concluded that he was not an ordinary man. And this is what we, the members of his household, saw, not just in his visible life in public, but in his personal life at home. His life shaped our lives until this day.

He was not ordinary in his love of the person of Jesus and the name of Jesus with his whole heart and soul and mind and strength: Jesus was not a facet of his life; Jesus was the focus of his life and life itself; Jesus was the air that he breathed and that we breathed with him. Jesus was the passion of his life and his joy and his delight. He would speak of Jesus day and night, in his sickness and in his health, during the best times and the hardest of times. He would sing of Jesus in the house and while walking on the street, not worrying about what people, in their vacuous social protocols, might say. He would see no one except Jesus and Him crucified.

He was not ordinary in his love of his neighbor as himself. He did not even know how to hate, for his heart was filled with Jesus, holding love for his neighbor and for his enemy. He showed his love in the most important way: sharing his testimony of the valuable salvation through Jesus' blood. He would speak to anyone he met without introductions or embarrassment; how could he be silent when the person in front of him could die at any moment and face the terror of Hell? He would speak in appropriate times and inappropriate times, and especially inappropriate times. He would speak to everyone: the relative, the neighbor, the grocery seller, the driver, the policeman, the government employee, the religious leader, and in the clinic and the hospital to the doctor and the surgeon and the nurse and cleaner; he did not leave anyone. People would listen with interest because they saw a man who spoke with a heart, honesty and  passion that they had not witnessed before -- when he would speak about his personal experience and Jesus' death in his place the tears would spill from his heart and fill his eyes. He was especially known for his deathbed ministry; he would visit the sick at the right moment, and, in most cases, he would leave with a saved soul. He would cry before us for relative of his that he had spoken to for years but who had not responded, but he would not be disheartened and continued to pray for their salvation and talk to them whenever he saw them again.

He was not ordinary in his love for the word of God and in his firm stand for it. He would memorize long passages of the Bible, often stopping in the midst of a poignant verse to reflect on its beauty as if he were staring at a painting or a scene in nature, exclaiming 'oh my' with tears in his eyes.

He was not ordinary in his integrity, and in his honesty, and in his dignity. He wouldn't let money shake his integrity a single millimeter; in fact no power on earth could shake him, even the power of hunger and the need to provide for his family. There were days when he needed a loaf of bread for his family. Some friends would advise him to exaggerate the number of people who attended his church in the annual report to the mission, sending pictures of the church during Christmas or Easter when an extraordinary number of attendants would pour in to receive presents, but he persistently refused. One person pitied him and sent an exaggerated report himself. Odeh saw the report in a magazine, and became furious. You can imagine what he did next. He immediately sent a message denying the exaggerated numbers of his church, an act that brought him high respect from the mission, and from the Lord.

He was not ordinary in his joy in the Lord, always seen with a wide pure smile on his face from the depth of a heart filled with the love of Jesus, the joy of Jesus, and gratefulness to Jesus.

He was not ordinary in his hard work and intricate planning and his extraordinary memory, and in his humility before the Lord in times of success and his daily gratitude with tears of gratefulness to God.  He built and accomplished from nothing, and he would always say, "Who am I to deserve all this spiritual seed, and this material blessing?”

Odeh Madanat deserves no credit in any of this; he was “retarded", and in his own words to me, "Without the grace of God I am a child of death not a child of life". Yet the man with the disabled hand had a great heart, a heart that the love of Jesus filled and so overflowed with fruits that we remember today not to glorify Odeh Madanat but the One who saved and was exalted in a “retarded” one like Odeh Madanat.

When his sickness was at its worst and he could barely speak, but the few words that left his mouth were blessings to his loved ones and a desire to see Jesus. He would repeat in the long night, "I want to sleep, I want to sleep."  Finally, at 5 a.m. on Saturday, amidst worship songs, he slept, so peacefully, only to awaken and find himself standing in the glory of the One for whom he lived and died, and saying to Him “Master, you entrusted five talents to me; see, I have gained five more talents,” then hearing from the Master’s mouth the greatest words that are life itself:  ”Well done, good and faithful servant; you were faithful with a few things, I will put you in charge of many things, enter into the joy of your master.”

We thank the Lord today that he gave us a husband, and a father, and a grandfather, and a brother, and an uncle, like Odeh Madanat. We thank Him for His great love and His great work. Amen. 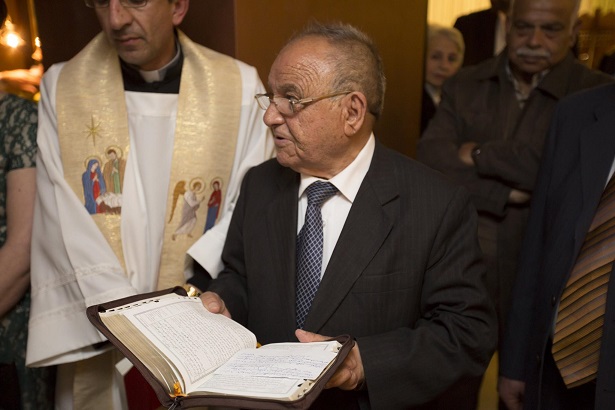