5 Believers from Israel and Palestine on the Women Wage Peace March
This past Wednesday, I marched with 4,000 Israeli and Palestinian women at Jesus’ baptismal site near Jericho, chanting "Women walk for peace." I walked to show solidarity with my Israeli Jewish, Palestinian Muslim and Palestinian Christian sisters that I, as an evangelical Palestinian, believe that our leaders should come to the negotiation table to make a political agreement that will end our conflict.
Listening to the Nobel Peace Prize winner Leymah Gbowee, a devout Christian who mobilized her church and community to end the civil war in Liberia, and Hind Khoury, director of Kairos, I felt empowered that we, as Christians, can play a role in achieving a just and equal peace. Leymah’s words stay with me: “As we stand in this space of equality, justice and oneness, the message that I get as a Liberian coming to Israel and working with Israelis and Palestinians is that this space is a representation that we are doing peace because we are equal and none of us is better than the other.” May this be our prayer and call to action as Palestinian Christians and Messianic Jews.
--Shadia Qubti, Israeli-Palestinian C​hristian
--------------------
Sukkot, the Feast of Booths, is a time where Jews remember that G-d brought us out of Egypt and we dwelled in the desert for 40 years as the generation changed their perspective from that of slaves to free people.
This Sukkot, thousands of women voluntarily gathered in the desert, this time as free women, to protest the idea that we are enslaved to war, conflict, or politicians that seemingly dictate our futures. And just as it was 4000 years ago, so it is now -- they do not dictate our futures.
Several concepts stood out to me. First, there is the biblical concept that when you walk out of the land, G-d will give you the land where you put your foot (Gen 13:17). Second, do not believe them when they tell you it cannot be done (“There is no partner”) (Psa 1:1). Third, G-d requires us to do justice (Mic 6:8) and walk humbly. As Israelis, we have walked too proudly for too long, thinking that we can treat people unjustly and it will not affect us.
To me this march demonstrated that we are changing our mentality again, from slaves to free people.
--Hedva Haymov, Israeli Messianic Jew
--------------------
It sent chills down my spine to see so many people gathering together to bring an unmistakable message to the world: that peace is possible, that there is hope, and that Israelis and Palestinians can work together, walk together, and cheer together for a better future for all the people of this land. The sense of solidarity was astounding!
Leymah Gbowee's inspiring words were dynamite. She could hardly speak two words without the audience breaking out in rapturous applause, because everything she was saying was so poignant, expressing what many of us feel but have had a hard time articulating within our respective communities in the (oftentimes) very isolating and exhausting grind of day-to-day peace work.
The march reminded me that I am not alone. There are thousands all around me who believe as I do and share the same vision for equality, justice, security, and freedom for all. Peace is happening, and has been happening, for a very long time. Wednesday’s march simply made visible the invisible and brought to the fore a current that, though often overlooked, is no less real..
--Elie Pritz, Christian in Israel
--------------------
This past Wednesday, I heard the voices of thousands of Israeli and Palestinian Muslim, Jewish and Christian mothers crying out for a better future, for another way, for an end to violence, bloodshed, and terror. We raised our voices in Arabic, Hebrew and English singing a song especially composed for this event: “From the West to the East, from the North to the South, hear the mother’s prayer, Bring down the peace, Bring down the peace.”
We traveled to Jerusalem and still singing, we marched to the Prime Minister’s house, ending in a large rally in central Jerusalem. There we heard deeply moving personal stories of the quest for peace and its cost.
As a Messianic Jew in this gathering, I could have felt very alone. To my knowledge, I was one of less than five from my community, but I never felt alone. I was with sisters who share my heart and God’s heart for peace. Again and again I heard the words “Blessed are the peacemakers” and from Psalm 34 “Who is the one who loves life. . . let him turn from evil, do good, seek peace and pursue it.”
--Lisa Loden, Israeli Messianic Jew
--------------------
It gave me hope to see all these women (and men) come together for peace in light of recent despair and violence. While our situation in Palestine is quite different from Liberia, it was moving to hear Leymah Gbowee encourage us from her experience waging peace in her country’s dangerous and violent conflict.
Women Wage Peace put aside issues that divide and committed to peace. As a Palestinian, I was uncomfortable that they did not address core issues like the expulsion of Palestinians in 1948 and 1967, the settlements, and more. At the same time, I wanted to show solidarity and my commitment to peace.
I was happy to see Hind Khoury, a Palestinian Christian, address the Israelis: “Will you last? Peace is hard work. Poverty, unemployment, insecurity, daily oppression and violence cannot endure. We also want our children to live, to love, to have a family, to have a decent and secure world, and to enjoy freedom.”
As a Palestinian Christian, I was proud to walk in solidarity with Palestinian Muslims, demonstrating that we as Palestinians want an end to the conflict, we want peace, and we are partners for peace.
--Shireen Awwad Hilal, Palestinian Christian 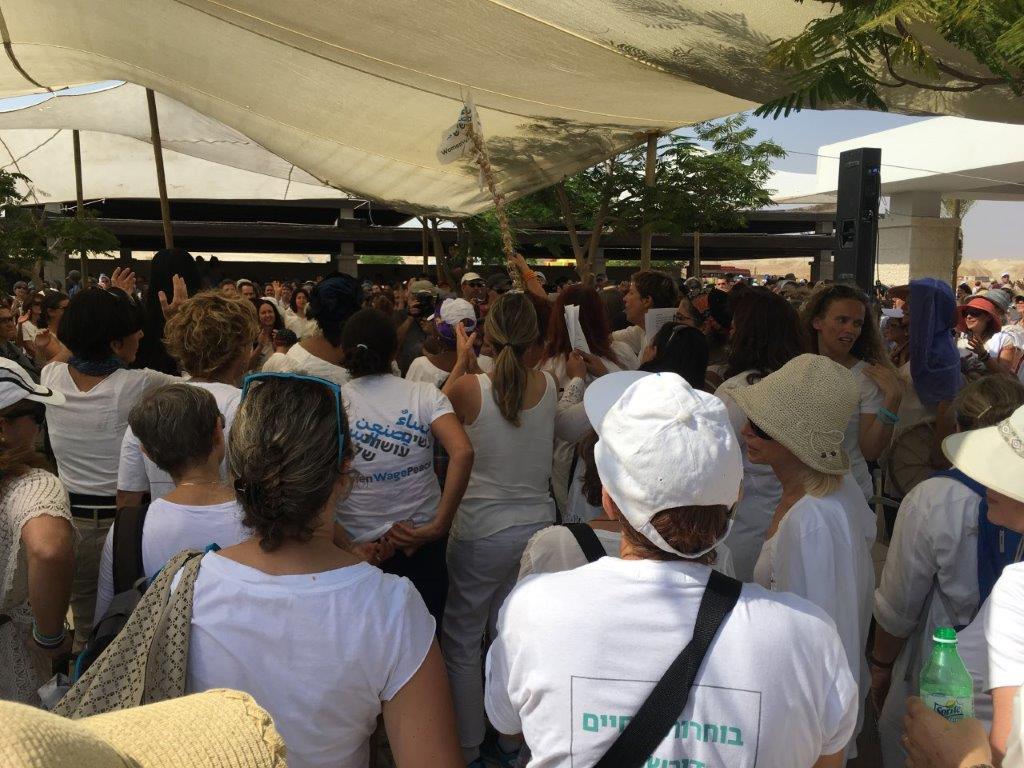 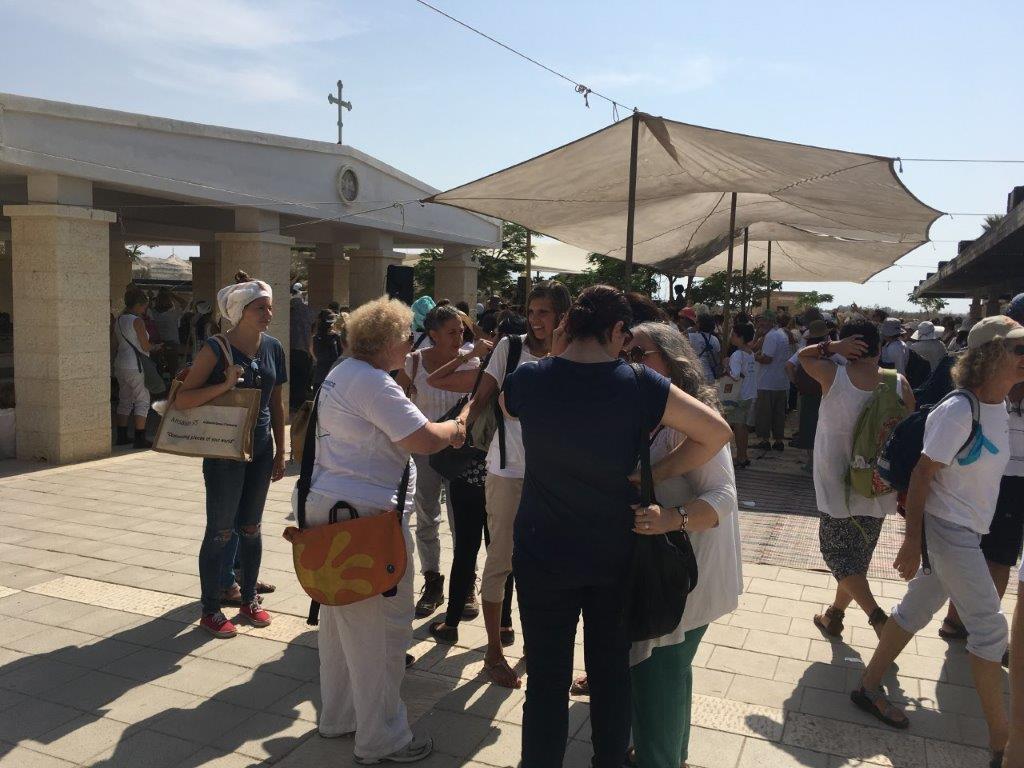 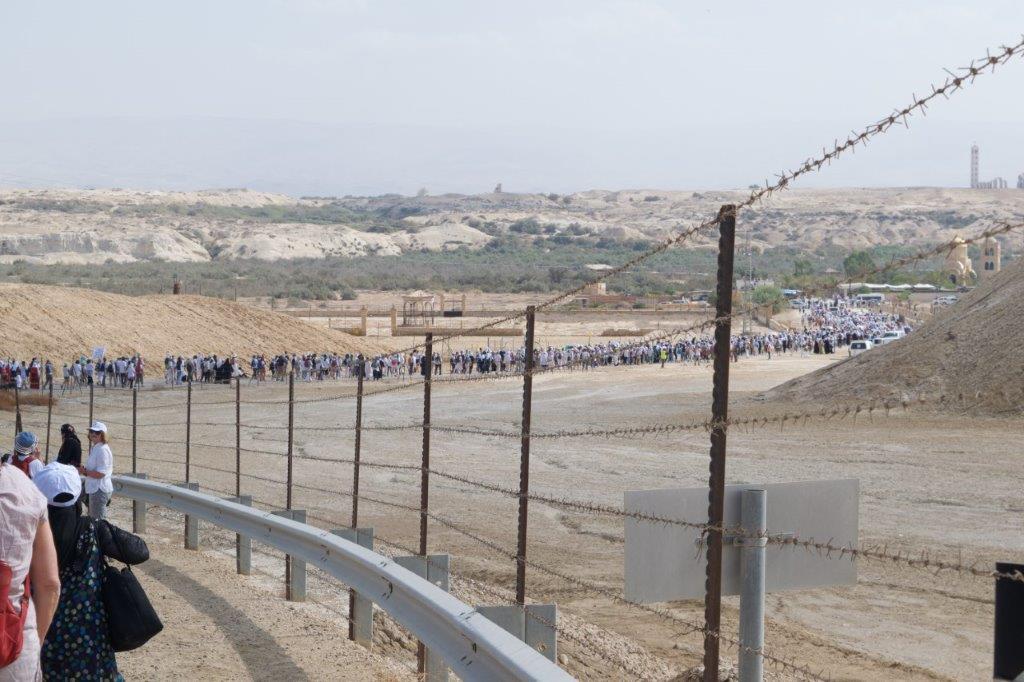