The 1,300 villagers raise crops of olives and wheat, or send their young men to work as building laborers in nearby Ramallah. Some make it to universities. Hundreds have fled to the West in search of a better life after decades of war, occupation and violence.

There are three churches in the village: Greek Orthodox, Greek Catholic and Roman Catholic. In other towns in the Holy Land, Christian congregations often argue among themselves over control of holy sites, and they celebrate major festivals according to different calendars. In Jerusalem and Bethlehem, for example, there are three different Christmases continuing into January.

But in Taybeh, the churches are united. They celebrate Christmas together every Dec. 25.

Holiday preparations in this oasis of Christianity, like the pace of life in general, have remained almost unchanged for centuries. This morning, villagers and their guests attended services at one of the three churches, then took to the streets for the customary visits among family and friends -- bringing the traditional dishes they have been preparing for weeks.

Raj'a Basseer was in her kitchen last week preparing sweet burburra soup, jibneh cheese balls and mansaff, a dish of meat, rice, almonds and yogurt. In the basement of her house, she still keeps the old millstone her grandparents used to grind their wheat and the clay pan they used to roast fresh coffee.

Her 83-year-old father, Jamil, recalls the days when the villagers would pay their debts in figs, milk, eggs and olives. As a boy, he would travel to Jordan by donkey -- a four-day journey -- to buy wheat. "It was much better back then, in the days without money," he said.

In the garden of his home opposite the Greek Catholic Church, stonemason and woodcutter Aid Jasser, 83, chopped firewood. "There is something special in our blood because Jesus himself passed through here," Jasser said. "It makes us proud to be Christians."

"Our people want to keep Taybeh Christian in order to preserve the Christian legacy," said the Rev. Daoud Khoury, the Greek Orthodox priest. "If some other people came to this village, I think they would not protect or preserve it like the Christians. It's a part of our life.

"At Christmas, we have unity," he said. "The three churches are united with each other, and we make ceremonies and prayers together. On Palm Sunday, we go through the streets in this village together."

Local tradition says Jesus stayed in Taybeh for several weeks before departing for Jerusalem, where he was crucified. Taybeh observes Palm Sunday -- Jesus' entry into Jerusalem before Easter -- according to the old Orthodox calendar. A procession winds through the village, collecting the faithful from each church and ending up with a joint ecumenical service celebrated by the three priests together at the St. George Greek Orthodox Church, the successor to a church built in the fourth century.

"It's beautiful," said Maria Khoury, wife of the mayor and author of a series of children's books about Christian life in the Holy Land. "The symbolism recalls Christ's glorious walk into Jerusalem after he left our village 2,000 years ago.

"There is nothing more psychologically comforting and spiritually powerful than feeling the presence of God and knowing, as a Christian, you walked the same footsteps as Christ himself during his last retreat into the wilderness before his crucifixion," said Khoury. In a village this small, many people share last names and are distantly related.

Taybeh is draped like a necklace around Mount Asur, the highest peak in the West Bank. On the summit stands a crumbling crusader fortress.

One clear day last week, the Rev. Raed Abusahlia, the Roman Catholic priest, climbed the magnificent fourth-century Byzantine ruins of the original St. George church, with its ancient stone baptismal font in the shape of a cross, and looked out over the biblical wilderness, across the mountains of Samaria toward the Judean desert, the Dead Sea and the ancient city of Jericho. Fifteen miles to the south, Jerusalem sparkled in the winter sunlight.

"We are fanatic, but in a positive way," he said. "We have this consciousness to keep at least one totally, entirely Christian village in the Holy Land. We don't sell our property, we don't even rent a house to anybody who is not from Taybeh."

According to the Gospel of St. John, Jesus fled to the village -- then called Ephraim, one of six "cities of refuge" in the Holy Land -- to escape persecution after the miracle of raising Lazarus from the dead. "Jesus therefore no longer went about openly among the Jews, but went from there to the country near the wilderness, to a town called Ephraim, and there he stayed with the disciples," said the Gospel (11.54).

The village name was changed to Taybeh by Salah A-Din -- known in the West as Saladin, the Islamic warrior who wrested the Holy Land from the Christian crusaders in the 12th century. "The folktale states that Salah A-Din visited the village Ephraim and found its people very hospitable and generous, thus he made a statement that they are taybehn people in Arabic, meaning 'good and kind,' " Maria Khoury said.

During renovations to the Greek Orthodox Church up the hill, the Rev. Khoury stumbled across an ancient mosaic decorated with birds and flowers, which may predate the Byzantine ruins of St. George's. He has had a chapel built over the mosaic to protect it and is hoping it will be studied by scholars some day.

Greek Orthodox priests are allowed to marry, and he can trace his lineage in the local priesthood back 13 generations -- more than 600 years. "The name 'Khoury' means priest," he said.

Near the mosaic, cut into the mountainside, is a tiny cave with a hole in the roof leading up to a house above. According to Salem Demand, a local woman who is writing a history of the area, this was where Jesus hid during his stay in the village.

"He hid in this cave, and the family in the house above gave him food and water through the hole in the roof," she said.

Demand said the family was called Sirhan, and some of their descendants still live in the village. By a strange twist of fate, a young Taybeh resident from the same family, Sirhan Sirhan, achieved international notoriety in 1968 when he assassinated Robert F. Kennedy in Los Angeles.

In the three years since he became their priest, at the height of the Palestinian intifada, Abusahlia has seen nearly 50 people leave Taybeh.

He said the first priority is to create work and improve the prospects for young people. He has started a medical center and an old people's home, and he has created a cooperative to sell olive oil -- Taybeh's main crop -- to a French distributor. Revenues go straight to the farmers, with a 15 percent tithe to the church to maintain the schools, old age home and aid to the poor.

There are more projects in the pipeline -- including a solar-powered car, the first in Palestinian territory.

"I think this is the beginning of a new revolution in Taybeh," he said. "We will try to become a pilot example for other surrounding villages, especially -- and this is my main concern -- the Christian communities left in the Holy Land, and I hope that we will succeed."

"I believe I made history in Palestine, to make the first Palestinian beer, and I'm proud of it," said Khoury, surrounded by the shining steel tanks and bottling conveyor belts in the brewery he built next to his home. "Everyone benefits -- the Palestinian Authority from the taxes, the workers at the brewery, even the gas station where we buy fuel for the car to move around. It's like a chain."

Because of the hardships associated with the intifada, the brewery is running at only 30 percent of capacity. But by summer, Khoury hopes to begin production of a nonalcoholic beer for the Muslim market -- produced by a Christian, acceptable to both Jews and Muslims. Peace in a bottle.

Taybeh is surrounded by Muslim villages, Israeli military roadblocks and Jewish settlements. Muslim children study in the village's schools. Their parents shop in Taybeh's stores and work in its cottage industries, but relations can be strained.

In September, Muslim youths stormed the village and torched 16 houses after a Christian man was accused of getting a Muslim seamstress pregnant. Her family put her to death in a traditional "honor killing," then came after the alleged boyfriend until the Palestinian police stopped them.

Occasional disputes with Muslim neighbors are insignificant compared with the effects of the Israeli occupation. Taybeh has been blocked off for days by army roadblocks. The 20-minute journey to Jerusalem -- where many villagers work -- is often lengthy and sometimes impossible. Israel's new security barrier threatens to cut off Taybeh from Jerusalem completely.

Every year, Abusahlia plays Santa Claus for the village children. Last year, Santa rappelled down a rope from the church bell tower. This year, he built a papier-mache brick wall to represent the Israeli security barrier between Taybeh and Bethlehem. Today, the children were to break down the wall and use the bricks to build a bridge over the altar, representing peace and providing Santa with a way into the church.

Abusahlia has created a special peace lamp, shaped like a dove and filled with Taybeh oil, which he hopes will soon be burning in 100,000 churches around the world. "It is a symbol of the light of peace shining from the village where Jesus stayed, and also a symbol of support for this Christian community, because to burn the lamp, you must buy our oil from the local farmers," he said.

"We are Arabs, we are Palestinians, we are Christians at the same time," he said. "We are people of this land. We are here since 2,000 years ago. We are not persecuted, we are not weak. We are very strong, and we will stay here forever."

In the West Bank village of Taybeh, the Rev. Raed Abusahlia (right), the Roman Catholic priest, celebrates Mass on Sunday. Photo by David Blumenfeld, special to the Chronicle 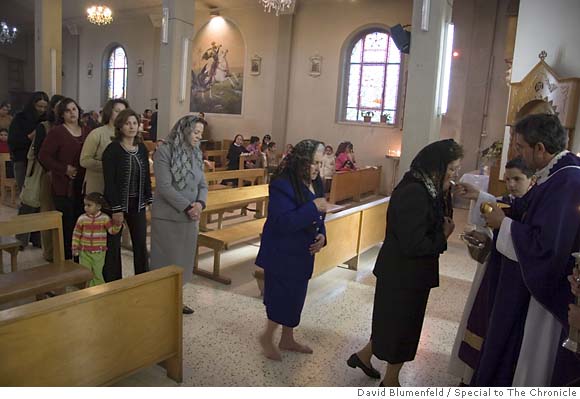 The ruins of the original St. George church, which date to the fourth century, are in Taybeh. Jesus is believed to have stayed in the village before his crucifixion in Jerusalem. Photo by David Blumenfeld, special to the Chronicle 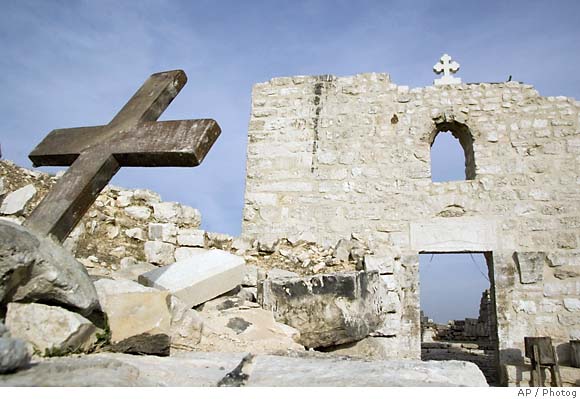 This peace lamp, filled with oil from Taybeh, is the creation of the Rev. Raed Abusahlia. Photo by David Blumenfeld, special to the Chronicle 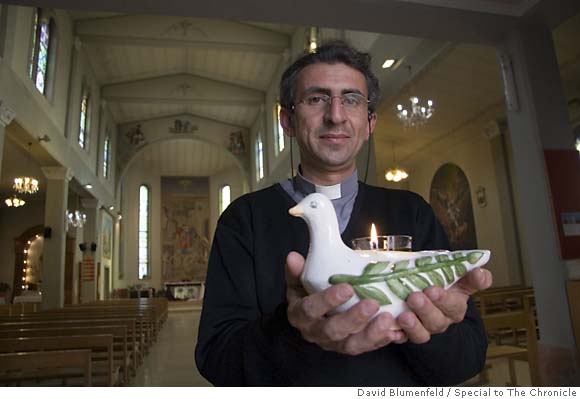