Thursday and Friday afternoons, a haggard bus drives a circuit through garbage-strewn neighborhoods in one of the world?s most volatile and densely inhabited areas of the world, where half of the population is under age 15.

Israeli punsters quip ?go to Gaza? when they mean ?go to hell.? Many say it?s an apt comparison for this tract of misery that nobody likes yet everybody is fighting over. Gaza?s scant biblical significance is largely evil.


Gaza smells of salt and decay, a place where donkeys are left to rot where they fall, where violence is normal and life for most is a hopeless, toxic mix of poverty, sickness, joblessness, illiteracy and domestic abuse. The Gaza Strip?s 1.3 million people live on a speck of land the size of Corpus Christi, Texas, a city that holds just one-fifth of Gaza?s population. The United Nations says 70 percent of Gazans live on less than $2 a day. Israel, which controls the strip, allows few Gazans out and few visitors in.

Almost all Gazans are Muslim. Only 9,600 are considered ?Christian.? Most attend a Greek Orthodox, Roman Catholic or Anglican church because that's where their families have belonged for generations. Christian numbers are dropping as many of those who can are fleeing their homeland for places that offer brighter futures ? Europe, the United States and South America. Just about anywhere is better than the dead-end existence that Gazans collectively face. Some even become Muslim.

Among those pressed on all sides are children from nominal Christian backgrounds. Their Muslim friends, neighbors and teachers also constantly urge them to convert to Islam.


So twice a week, Gaza Baptist Church?s chartered Awana bus stops by the houses and apartment buildings of approximately 100 children to take them to an afternoon of fun, fellowship and filling their hearts with God?s Word. It?s hard to overstate the importance of Awana to children from traditional backgrounds ? and to the gospel?s future presence in Gaza. Awana is reaching children who were raised in the church but were never grounded in their faith.

Tiny but growing Gaza Baptist, planted some 50 years ago by Southern Baptist missionaries, is the Gaza Strip?s only evangelical church. Almost all Awana clubbers are Greek Orthodox or Roman Catholic. And they're not only coming to Christ but also are reaching their parents, friends and neighbors with the gospel.

Before Awana began at Gaza Baptist as an outreach primarily to nominal Christian children two years ago, ?These children didn't know anything about the Bible,? says Suhad Massad, director of Gaza?s Awana club and wife of Gaza Baptist?s pastor, Hanna Massad. ?They didn't know what is inside the Bible, and they didn't know the verses. The main idea is to let them know more deeply the Bible.?

An anchor within a spiritual storm


Since the Islamic Intifada, or uprising, began in October 2000, Hanna Massad has witnessed Gaza?s spiritual atmosphere evolve from a mainly secular Islam to a form that's far more devout. The reason, Massad says, is because most Gazans believe their suffering stems from Allah?s anger at them; stricter adherence to Islam will appease Allah and improve their plight. 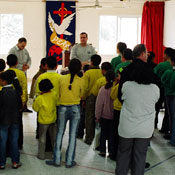 Gaza offers few fun options for Christian children to choose. Just about every activity for kids in Gaza centers on the Islamic faith. Even public schools are steeped in Islam. Religion is central to Middle Eastern life. Muslims constantly challenge Christians with myths they?ve heard about Jesus and Christianity: that Christians worship three gods, that Christianity is a ?changed? religion, that Jesus was just another prophet, that God cannot have a Son. Such an atmosphere sows uncertainty within those not grounded in their faith.

?If they're empty from inside, it?s easy to have doubts about Christianity and about the Bible,? Suhad Massad says. ?The main problem here is that they do not understand what you mean about God and the Son of God. It?s very easy for them to question their faith.? Without grounding, children and even adults are vulnerable to abandoning their faith.


Before Awana, when others challenged their faith, the children didn't know how to answer. ?But now when they have any question they can answer from the Bible directly,? Suhad Massad says. ?It really gives them the strength to share the gospel of love. At the same time we can teach them the Bible, and they can memorize the verses. We have testimonies from parents about their behavior with their family and friends. We can notice this, too.?

The children bear powerful witness that can win many to Christ. Parents? interest gets piqued by the dramatic changes in their Awana clubber children who come to faith. Parents often help their children memorize Scripture to win prizes, and in the process they hear the gospel.

Sometimes parents come to Sunday worship at Gaza Baptist, where they receive Christ. Awana disciples the club members and teaches even the youngest ones how to share their faith. Suhad says that about half of the clubbers have brought at least one parent to faith in Christ.

?The child is a gate to the family,? says Khader Khoury, who leads Gaza?s Sparkies.


Suhad Massad shares the story of Rami, a 10-year-old Orthodox boy whose Christian neighbors joined Awana and invited him to a meeting almost two years ago. In a few short weeks, Suhad watched Rami transform from a ?very naughty? child who cursed and fought with his siblings into one who is calm, helpful and polite. His language is no longer foul, and he is kind to everyone.

His amazed mother has not only encouraged her other children to attend Awana but also has begun attending church herself. One of Rami?s brothers has joined Awana. Rami also has invited others to attend.

Then there's Mousail, 15, a depressive loner from an Orthodox family. He turned down his siblings? invitations to attend club. Then the church launched a JV Awana group for teens. Mousail came to a meeting. The next week he returned. Leaders began giving him responsibilities. The teenager not only eagerly accepted the tasks assigned him but also asked to help with Friday programs for younger children. He, too, came to faith in Christ.

?He has the heart to help and minister,? Suhad says of Mousail. ?He likes to serve people.? Last year he was chosen to play the role of Jesus in Gaza Baptist?s Easter play.


Most of the 100 or so Awana clubbers have trusted Christ as Savior, but Suhad notes that discipleship is vital to keeping these children in the faith. ?We share with them every time the message that Jesus is the only way, but if you don't continue with them it?s easy to forget,? Suhad says. ?Sometimes they don't notice they're changing but the people around them will notice.?

Life isn't easy for traditional Christians who receive Christ. Gaza?s Greek Orthodox and Roman Catholic clergy, angered by what they perceive as ?stealing sheep? from their ever-dwindling congregations, not only actively discourage Awana and Baptist church attendance but also threaten families. Reprisals include parents losing their children?s scholarships or their own jobs at the Catholic school.

Some families won?t let their children attend Awana for fear of reprisals. In response to the popularity of Awana, some Orthodox and Catholic churches have even launched their own children?s programs.

Gaza?s Awana program is geared toward children from traditional Christian backgrounds. ?The situation here is very sensitive for other kids from other backgrounds to come to the Awana club,? Suhad says. Only one child from a non-Christian background takes part in the club. He leaves his Awana T-shirt at the church where he changes into it.

Ministering in a war zone


Then there are the dangers of living in a volatile zone. Israel has responded to suicide bombings by firing mortars at Palestinian Authority buildings or Hamas leaders. Christians have numbered among the innocent victims of such attacks. The roof of Gaza Baptist Church has collapsed four times following Israeli strikes at nearby buildings.

During Awana club meetings, ?Sometimes you can hear bombs and F-16s in the sky,? Suhad says. ?(Reprisal attacks) can happen anytime, anywhere, and sometimes we?re afraid (the Awana clubbers) can't get home safely.?

But God?s hand has protected this growing cluster of believing children. For two hours each week, a hundred Gazan kids can leave the woe around them, board the bus and head for a club meeting at Gaza Baptist Church. Awana is quietly transforming Gaza by bringing peace and revival to a hundred children's souls.
Comments