Six months ago, Suhad took the 21-month-old daughter, Joyce, to her parents' home to deliver their second daughter. He was able to leave Gaza to bring his family home. However, the Israelis refused to issue visas to Suhad and their daughters.

After few months and after the family appealed to the Israeli supreme court, with the help of advocate Sunny Khoury from the office Jonathan Kuttab in Jerusalem, the Israelis were willing to issue Suhad and the girls a visa. This came due to thousands of emails, faxes and letters that were sent to Israeli officials by worried Christians from around the world.

Rev. Hanna wrote in an email sent today to people around the world that were praying for them: ?We have experienced God's presence and power throughout the difficult trial we went through. First, I personally saw His presence through the encouragement of every one of you. Second, I saw God's powerful hand through people I never met before. God used their position and their influence to open the door for us to enter Gaza?.

The family left Amman about 8:30 AM and arrived their home in Gaza about 10 PM - after long day waiting at the Allenby Bridge. Rev. Hanna says: ?I don't want to complain, because I am so very grateful that we were able to enter Gaza?.

It has been a long month for Rev. Hanna Masaad. On Sunday, November 12, was a memorable day for Gaza Baptist Church as it proudly opened a new building for the only Christian public library in Gaza. Christian as well as non-Christian books can be borrowed from the large collection on the first two floors of the new building, as reported in the Open Doors UK web site. 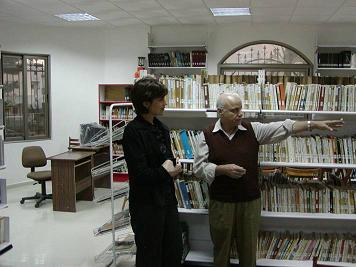 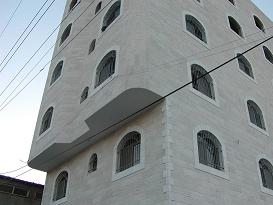 About 250 people were present, including some 30 international guests involved with the Christian community in Gaza. Several international guests were kept waiting until the last moment to be granted permission to enter, as their permits were only valid if officials considered it safe enough to cross the checkpoint.

Gaza Baptist Church wants to share about the future hope there is in Christ. One of the reasons for this public library is that it provides an opportunity to prove the church's involvement in the society and its openness towards others. The Baptist church has existed in Gaza for over 50 years. An elder recalled the opening of the first library in 1968, starting with 200 books.

During the opening ceremony, several speakers pointed out that the church is in an awkward situation in Gaza, experiencing daily pressure and uncertainty. But with God's grace, members of the congregation can find strength and hope to continue reaching out to their fellow Palestinians. Brother Andrew quoted Martin Luther King, saying, "If you do not deal with contemporary issues, you are not preaching the gospel at all."

In spite of the violent situation in Gaza, the church is focused on reaching out to fellow Palestinians. Last May when the building construction was still in process, the guard of the property was shot in crossfire. Almost every floor of the building was damaged by gunfire when warring Islamic parties entrenched themselves in and near the building.

The six-story building partially subsidized by Open Doors houses more than a library. The third floor will be a community health care facility for women and will contain a mammography machine used to do breast cancer research. This will be only the third machine available to the 1.5 million people in Gaza that can be used to carry out this kind of research.

The fourth floor will be used for outreach, and several activities are being developed by the Baptist ministry. The fifth floor is designed as guesthouse, so that the Baptist church can host workers from other cities or abroad.

The sixth floor is to be used as the church's worship hall, until the opportunity comes to build a church building.