In 1950, after months of grueling travel by sea aboard a ship, a young, American missionary couple arrived in Nazareth, eager and excited to minister, preach and serve in the small Baptist church and school that had been started in the hometown of Jesus. Dwight and Emma Baker had their 2 children with them: Bron and Bill.

The Nazareth Baptist School (and church), which had been opened in the 1930’s by Southern Baptists, was now closed due to World War II, and it was their mission to reopen it. Rev. Dwight Baker thus took on the responsibility of getting the school operative again, and assumed pastoral duties of the Baptist Church. His little family lived on site at the school, at first together with another American missionary family, and then later alone.

After a few years, little Bill started Kindergarten. His fluent Arabic with a Nazareth accent and dialect made him fit in easily with the local Arab children. The only thing that set him apart was his blond, curly hair and blue eyes.

Bill’s parents served faithfully in Nazareth for 10 years, at which time they were transferred to Haifa. But during those years, Bill, his brother Bron, his sister Carol and other younger brother Steve all attended the Baptist School. Bill completed the 5th grade there.

With the transfer to Haifa, Bill was able to master Hebrew as well. After finishing high school back in America, Bill joined the American Air Force and studied Arabic through the military in order to earn MA in Political Science with a concentration in Middle East Studies. This enabled him to serve in American embassies in the gulf as well as in Tel Aviv.

After retirement from the military, Bill – or Nabil Khabbaz (the Arabic version of his name which he likes to call himself) – joined the Middle East Department of Baylor University in Waco, Texas.

As always, childhood memories are preserved in our hearts for years and this was no less true for Bill. Through all his years he held a special place in his heart for Nazareth in general and the Baptist School in particular. In 2004, Bill attended the 50th graduation ceremony of the school, which had then grown to become a local run K-12 grade school, enrolling around 1,000 students, with an excellent academic and spiritual reputation that has impact around the globe. Then, together with other missionaries and missionary kids, he formed a non-profit organization called NEMA (Nazareth Educational Ministries Association) in order to support their beloved school in Nazareth http://www.nazarethedu.org/ . For some time NBS has struggled with the crowded facilities it has while still trying to keep up with its outstanding reputation. In 2006, NEMA joined with another group called “Friends of Nazareth” (FON) in order to help raise the monies that are desperately needed to fund an expansion project. http://www.friendsofnazareth.org/

Earlier this year, NBS invited Bill to receive an honorary Certificate of Graduation, in fulfillment of his wish that he had gone on to complete his schooling at NBS, rather than only completing the 5th grade there. Therefore Bill came to Nazareth for a special experience.

On Saturday the 2nd of June Bill addressed the annual General Assembly of the Association of Baptist Churches in Israel as a key note speaker. He shared about his childhood memories, and spoke about his parents’ love for the people of Galilee and about how blessed they feel to be able to see and hear about the fruits of their labors of love and ministry. Dr. Dwight Baker and his wife, Emma, now preside in a home for the elderly in Dallas, Texas, and are so thankful to the Lord for all He has done through them and their children.

In the evening of the same day, NBS held its annual graduation ceremony at the Golden Crown Hotel in Nazareth. More than 500 people were present, including the mayor of Nazareth and the president of the Weitzman Institute who had come to congratulate the school on its achievement of Excellency nationwide. Before the 72 graduates of NBS were awarded their diplomas, the General Director of the school came to the podium, introduced Bill, and asked the Chairman of the Board of Directors of NBS, Mr. Fuad Haddad (who was the principal of NBS’s primary school in the 1950’s when Bill was a student there) to come forward to present the certificate of graduation to him. The present principal of the school accompanied him.

Bill was quite excited and emotional when he got to the podium, wearing his graduation gown and cap. As the certificate was handed to him, Mr. Haddad stated that Dr. Baker was “awarded this Honorary Certificate of Graduation in recognition and appreciation of his ongoing support and friendship to our school”. The certificate was received to a round of applause as Bill shared that he felt this was the greatest honor he had ever received, and that coming to Nazareth was like coming home to family.

Bill spent his days after the graduation ceremony visiting friends and the school and discussing with school leaders plans of relocating NBS from its aging very crowded facilities.

Botrus Mansour, the general Director of NBS, notes that it is with the help of friends like Bill from all around the world that Nazareth Baptist school can continue its unique mission in the hometown of Jesus. 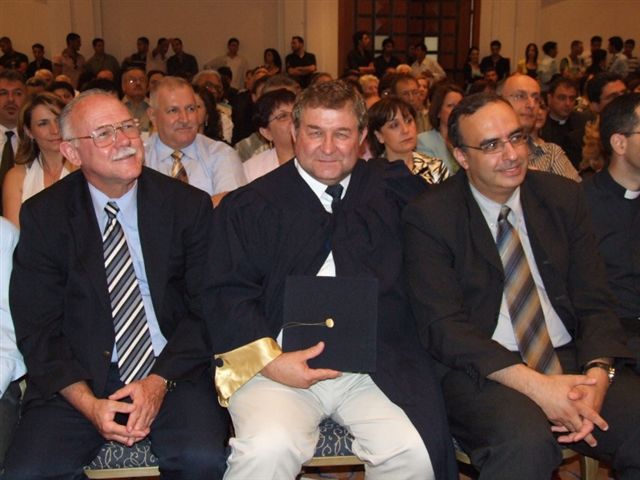 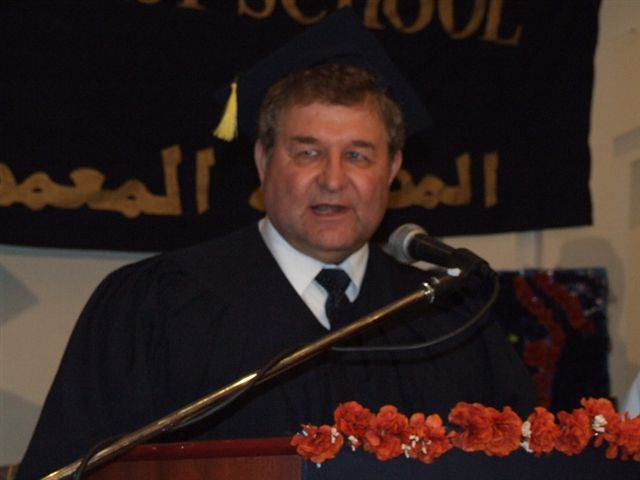 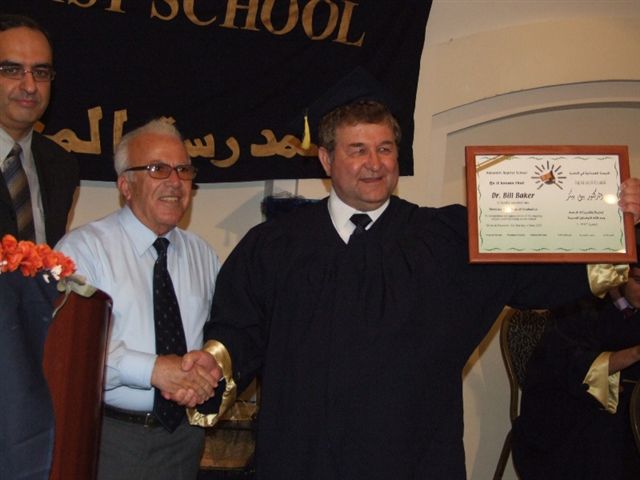 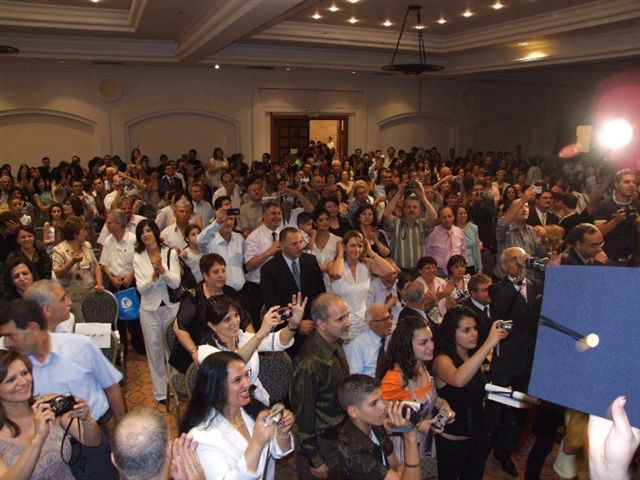 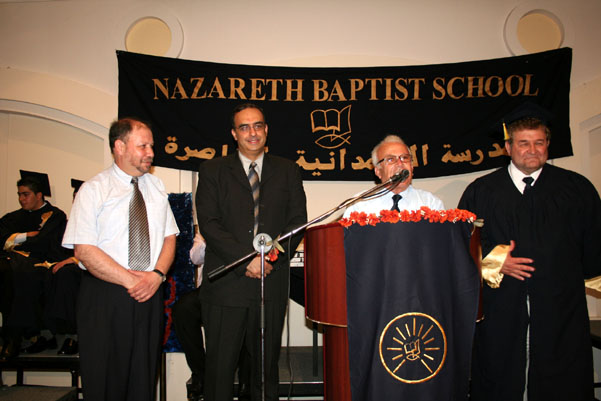 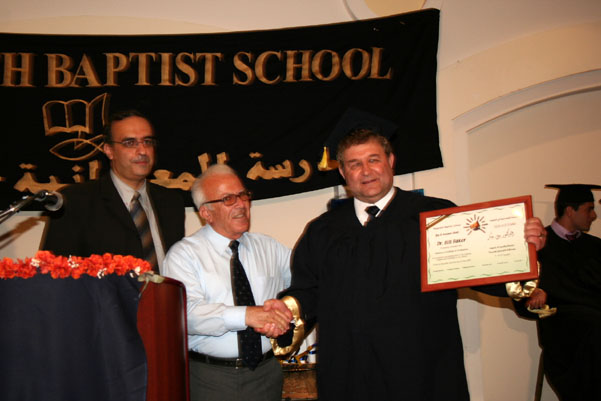 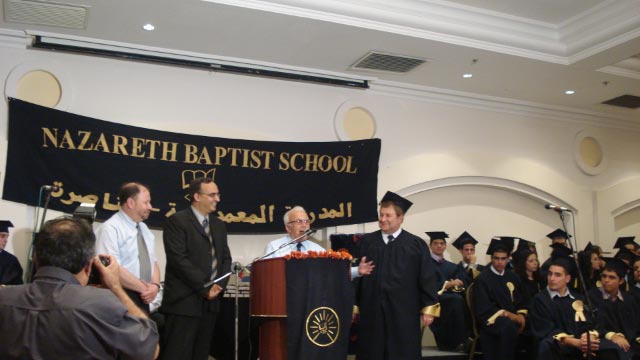 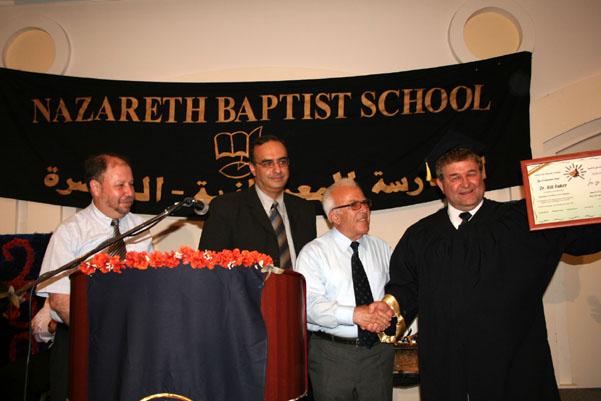 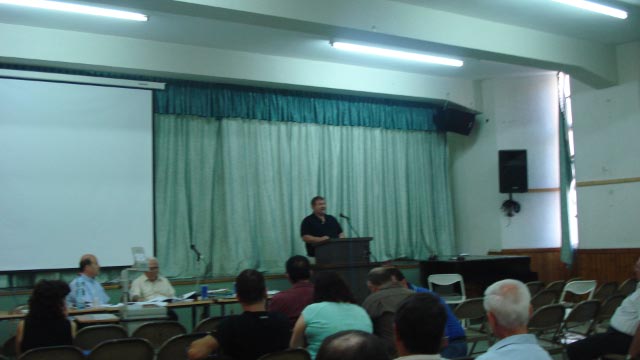 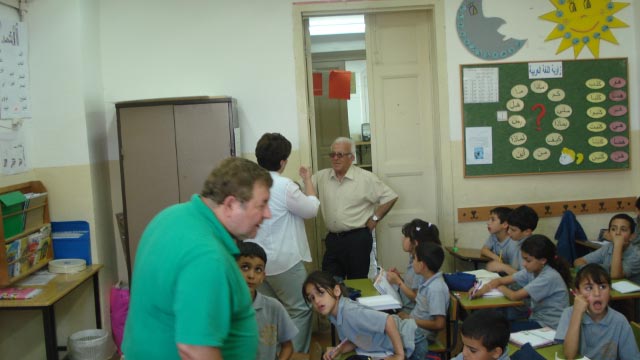 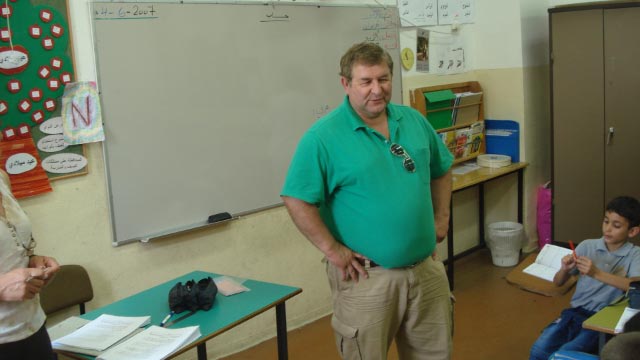