We invited (the BBC team) to our church that Sunday while they were out at the President’s ranch,” Abernathy said. The team asked him if the people in Palestine, Texas, ever associated themselves with Middle Eastern Palestinians. Abernathy said he had never really thought about the name connection.

“That was kind of a catalyst,” missions committee Chairman Breck Quarles said of the BBC visit.

In 2005, a church member alerted Abernathy and Quarles that a Palestinian minister was traveling in Texas and wanted to know if he could speak at their church. After a brief meeting, church leaders at First Baptist agreed.

That Sunday, Munir Kakish spoke to First Baptist in Palestine about needs among his ministries overseas. Kakish lived eight years in an orphanage in Ramallah, located ten miles north of Jerusalem, following his father’s death. After traveling to the United States for college in 1967, he returned to the Holy Land and began ministry there with his wife, Sharon, in 1978. 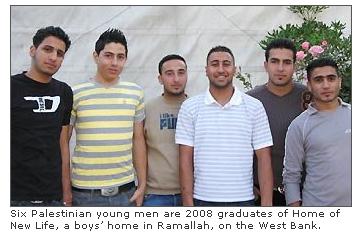 Kakish now serves as pastor for two Palestinian churches—one in Ramallah, the other in Ramla—and as founder and director of Home of New Life, a boys’ home in Ramallah, on the West Bank.

“We brought in that morning several thousand dollars to get kids enrolled in school. It was a confirmation from us that the church was behind what they were doing,” Quarles said.

Quarles and Abernathy visited the West Bank in May 2006. Upon their return, the Texas church confirmed a mutually supportive relationship with Christians in Palestine “in a number of different areas … with commitments to pray,” Quarles said. 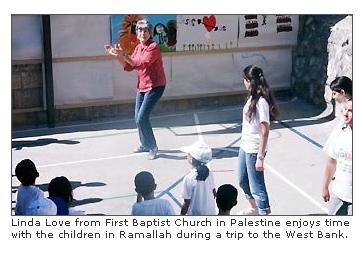 Even though ties between the Middle Eastern territory and the Texas town simply began by matching names, the link wasn’t insignificant.

“It was kind of a fun connection for so many of us. … It wasn’t coincidence. We felt a sense of kinship with them,” Abernathy said.

“I’m kind of amazed at how much gets done with a church this size. We don’t really have any money. God gets it done,” Abernathy said. “We’re just kind of your average Baptist church in Texas.”

In May, Abernathy and church member Steve Jenkins traveled to the West Bank with a team from Buckner International to explore possibilities of working with at-risk children there. Representatives from First Baptist in Palestine have returned overseas three times since the first visit in May 2006. 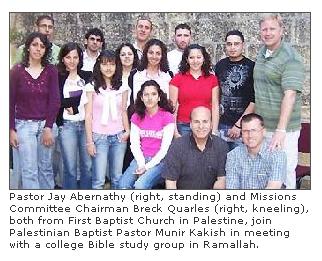 “It was such an incredible eye-opener,” Love said. “It’s taken a year for me to really digest and take in many feelings.”

Love ventured to the West Bank in 2007 with Quarles and fellow church member Cameron Cline. Interacting with Palestinian evangelicals gave her “a new perspective on life,” Love said. Instead of the often-negative stereotypes of Palestinians, Love said she encountered a people “so delightful and so generous.”

“It just gave me a totally different picture,” she said.

Increasing awareness and understanding among American evangelicals of the Palestinian Christian community motivates Abernathy to spread the word about ministry activity in the Middle East. 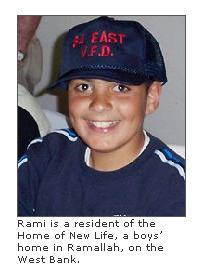 “A lot of folks just aren’t really aware of how many Arab-evangelical Christians are out there,” Abernathy noted. “We met a very vibrant group of evangelical Baptist Christians (in the Middle East), but they felt kind forgotten.”

As an unexpected result of their partnership with Christians in Palestine, First Baptist in Palestine has attracted the attention of Arab exchange students in local Texas schools.

“There’s a number of (Middle Eastern) exchange students—all of them Muslim—who feel totally comfortable coming to First Baptist. They come because they’re either staying at a church member’s home, or they get invited at school,” Quarles said. “They’ll stay, and they feel at home. They sense something there.”

The exchange of culture and Christian fellowship between these two otherwise foreign communities has forged a bond that shapes their members’ lives and worldviews. It’s an opportunity sent by God, Quarles said.

“I’m just amazed that God opened up the door for us to do that. I’m blessed to go to a church that is open to what God’s doing, and is willing to take a step of faith. We’ve prayed about it, and we believe that’s what God has called us to do.”

For Love, that “step of faith” has given her a greater vision of the world and its people.

“I think one of the main things is that we are to treat all people equally and fairly, as the Lord would. That’s an awakening for anyone,” Love said. “God calls us to seek the spirit, seek the soul of every person.”